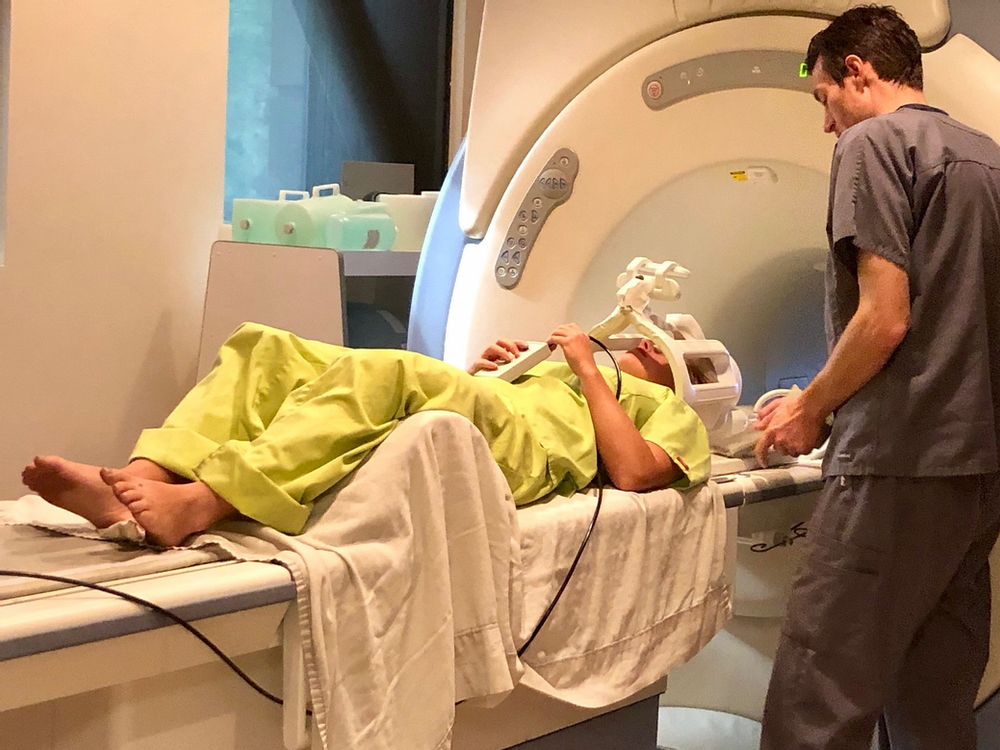 I had a lot of nerve pathways blocked; some pathways were completely blocked after my brain injury. I had learned to compensate for my nerve blocks. Finding out I had a lot of blockages was both a relief and nerve-racking. It was a relief because it helped explain certain troubles I acquired after my brain injury. Discovering I had all this blockage was inspirational for me because I knew Cognitive FX has an intense Bootcamp designed for each participant individually to help remove those roadblocks from a brain injury. I thought if I was already a good student, public speaker, ambassador, and commentator but still had a neural deficiency, we’ll fix that and there is no limit to all the things I can accomplish! 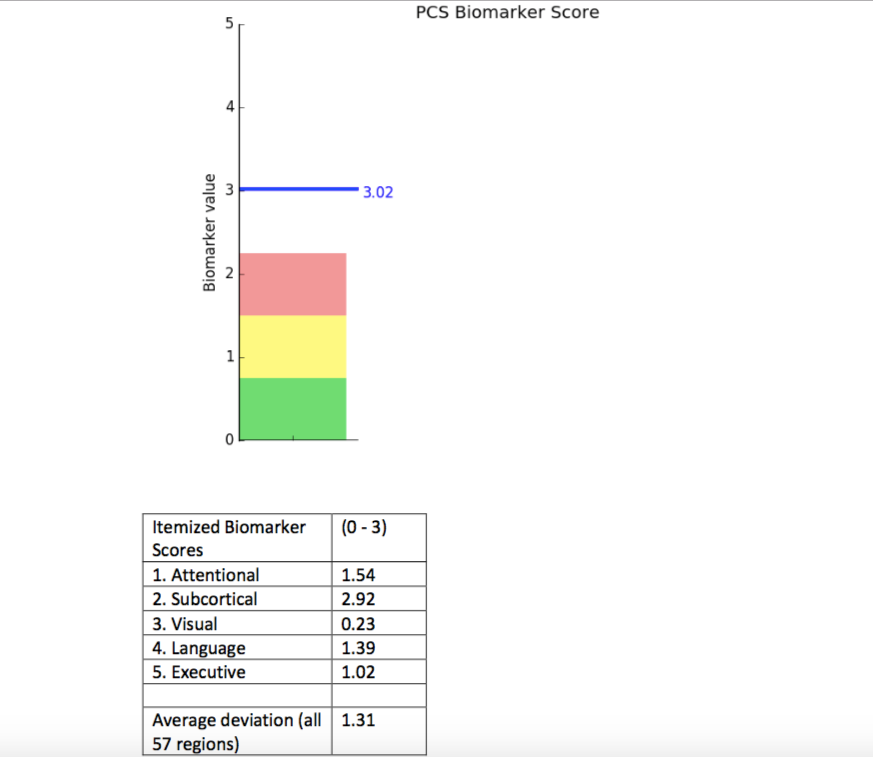 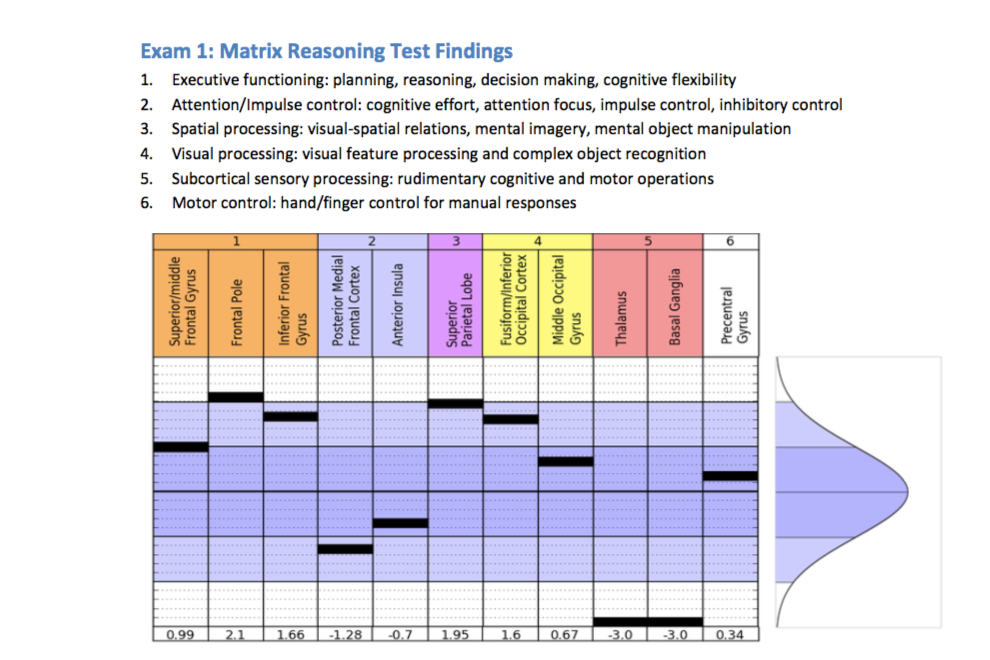 Exam one in the first fMRI test. The pink nerve pathways were not working at all!

In the fMRI test results, the goal is to have all the different indicators (bold lines) for each nerve pathway in the middle of the dark blue sections. The indicators in the light blue are troublesome but still adequate, and those in the white area are problematic.

Bootcamp is one week of different therapies for about eight hours each day. The therapy programs help unblock the nerve pathways that have been damaged. Some examples of therapy programs include Dynavision and Neuromuscular. A big portion of my brain that was blocked was the portion that takes care of multitasking. To work on this, I would perform physical activities while thinking through challenges with visual stimuli. 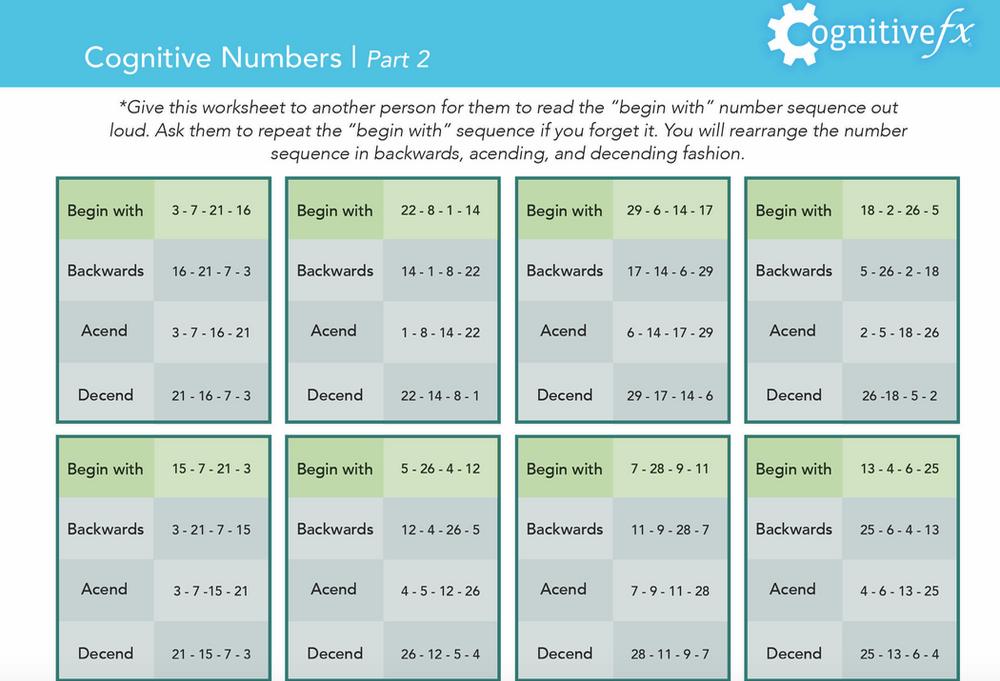 take-home a sheet with some cognitive exercises

Dynavision is a therapy program where you have different lights on a wall and you hit the lights with your hands. The Dynavision therapy exercises keep getting more complicated every day. You start out hitting every light. This is connecting your muscular activity with your vision. To get more complicated you can add colored disks by your feet to simultaneously use your feet and your hands. To add to that you can have little logos pop up in the machine in front of your eyes and have to do different cognitive exercises for each logo. 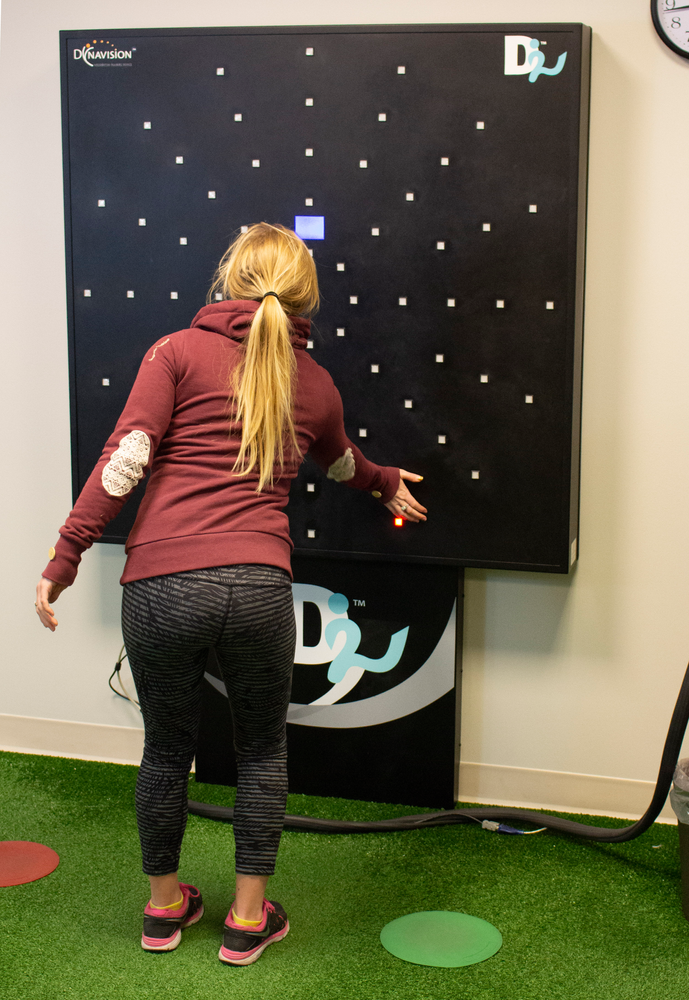 Because my right side had been paralyzed, my right eye worked a bit more erratically than my left. The therapists were all very impressed by how far I had come, but I still had some things to work on. I had to work on the convergence and divergence in my eyes. The eye therapy electronically recorded how each eye would look at things, You would do exercises like look from one spot to the next and it would record if your eye jumped around or made a clear line. 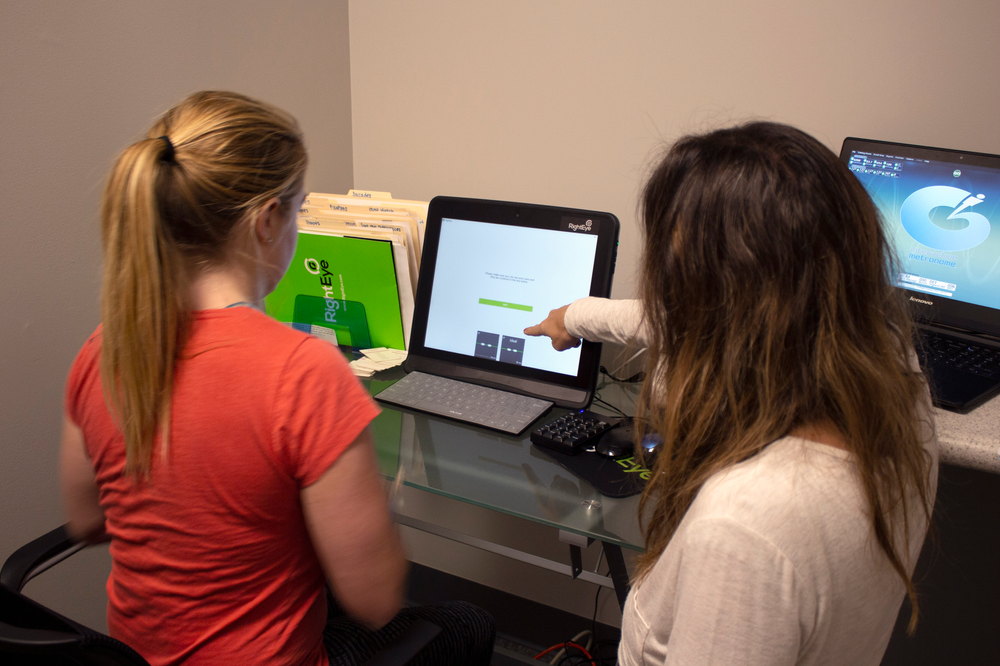 Neuromuscular Therapy was my favorite! No surprise considering I LOVE to work out and get my heart pumping and pushing myself! In Neuromuscular Therapy I really pushed myself. Every exercise I did would be some form of a combination of cognitive exercises, physical exercises, and often balance. The therapist and I would play verbal cognitive games, like categories; I would stand on a Bosu ball while squatting and throwing/catching a ball. I had not played cognitive games while exercising, but I’ve now discovered the benefits it provides in multitasking. 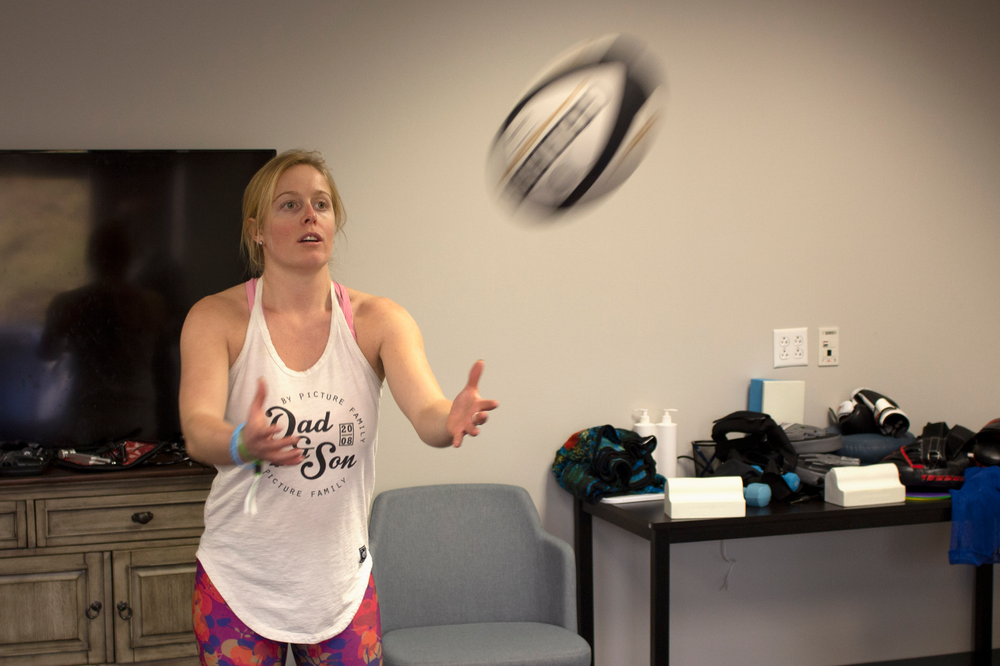 I knew I was really lucky to be able to do this cognitive boot camp. I got a scholarship from Cognitive FX because I was filmed for a short video (I will let you know when is released). The video will help with advertising what Cognitive FX offers and what to expect at your Bootcamp. In addition, I was SO lucky High Fives Foundation completely covered the rest of the cost! I have been a High Fives Athlete for three and a half years now, and I am so grateful they still offer me help to continue to heal!

Because I received so much support to allow me to attend the Bootcamp, I chose to take it as seriously as possible! Like I was actually going to follow every recommendation and not see how I could get around the recommendation. Cognitive FX says to not drink alcohol two weeks before the brain camp and four weeks after. I was going to Dew Tour a week before. A week after was Christmas, and then New Years’! But I didn’t drink any wine at any of those events! Good thing I had a wonderful New Years’ in a cabin you can only get to on snowmobiles, and it’s really funny to watch Reggie and all my friends get tipsy ;). Besides not drinking I started taking fish oil and probiotic supplements. I cooked using flax seeds, hemp seeds, and chia seeds, as well as Udo’s oil and Bulletproof oil. Every day at Bootcamp I had lots of raw nuts, figs, and super healthy snacks. I made sure to never get hungry, but fuel myself with the best ingredients. I did not watch any Netflix all week, did not work or homework on the computer, and just texted very very sparingly.

Why am I telling you all this? Because the nutrients you put in your body are SO important. The functional MRIs and Bootcamp is a 9,000 event. If you are spending that much to heal, I believe you should be putting 100% into healing. That means greatly reduce your electronic usage and eat extremely healthily. All the seeds, supplements, and oils allow you to heel further than expected. 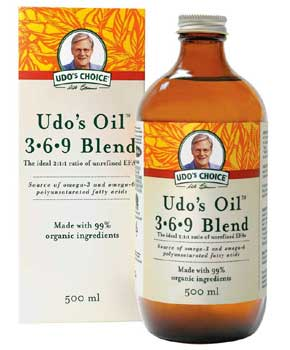 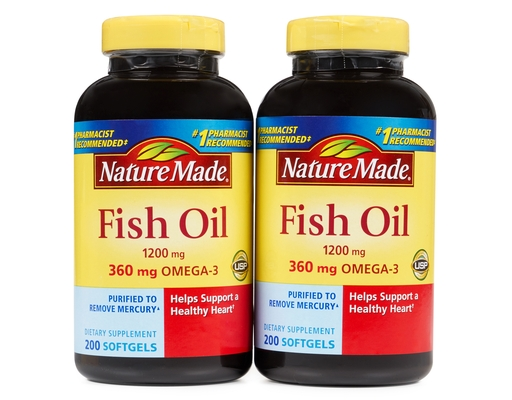 As you can see in my first functional MRI I was WAY above the red. There are 6 exams you take to give you the overall score. I had some nerve pathways that weren’t working at all! There was no blood flow to that part of the brain. The goal was to get my brain into the yellow or red categories. I would still have nerve pathways that were struggling, but I would at least be in the colors are on the chart.

My second Functional MRI showed I went all the way to the top of the green! The green means your nerve pathways work the same as a person who never received a brain injury.

They showed me the results and I teared right up. Fruit teared up too. The fact that I was back in the green showed my brain is back to being efficient. 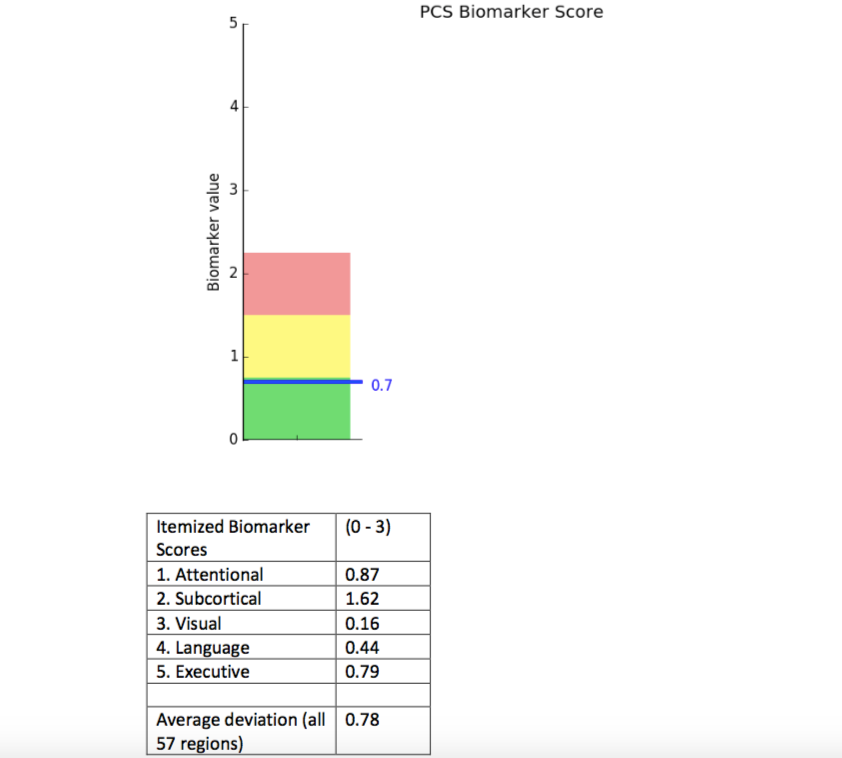 Second functional MRI overview. I scored 0.7 which means I am in the green zone with brain pathways that work as efficiently as if they had never been injured. 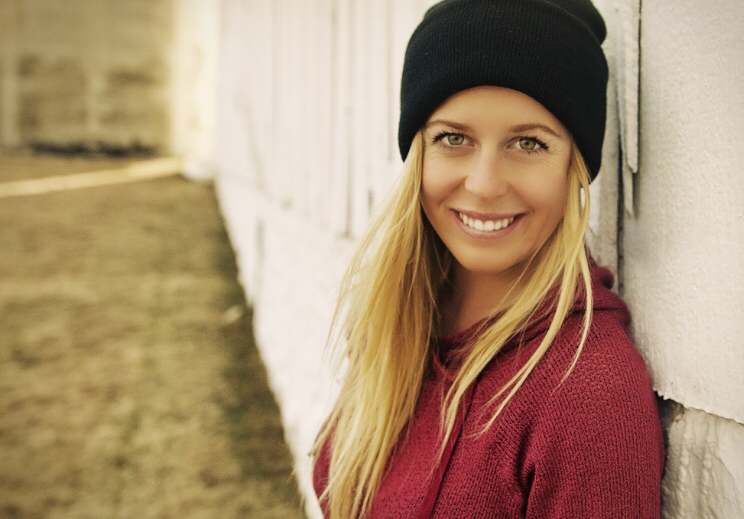